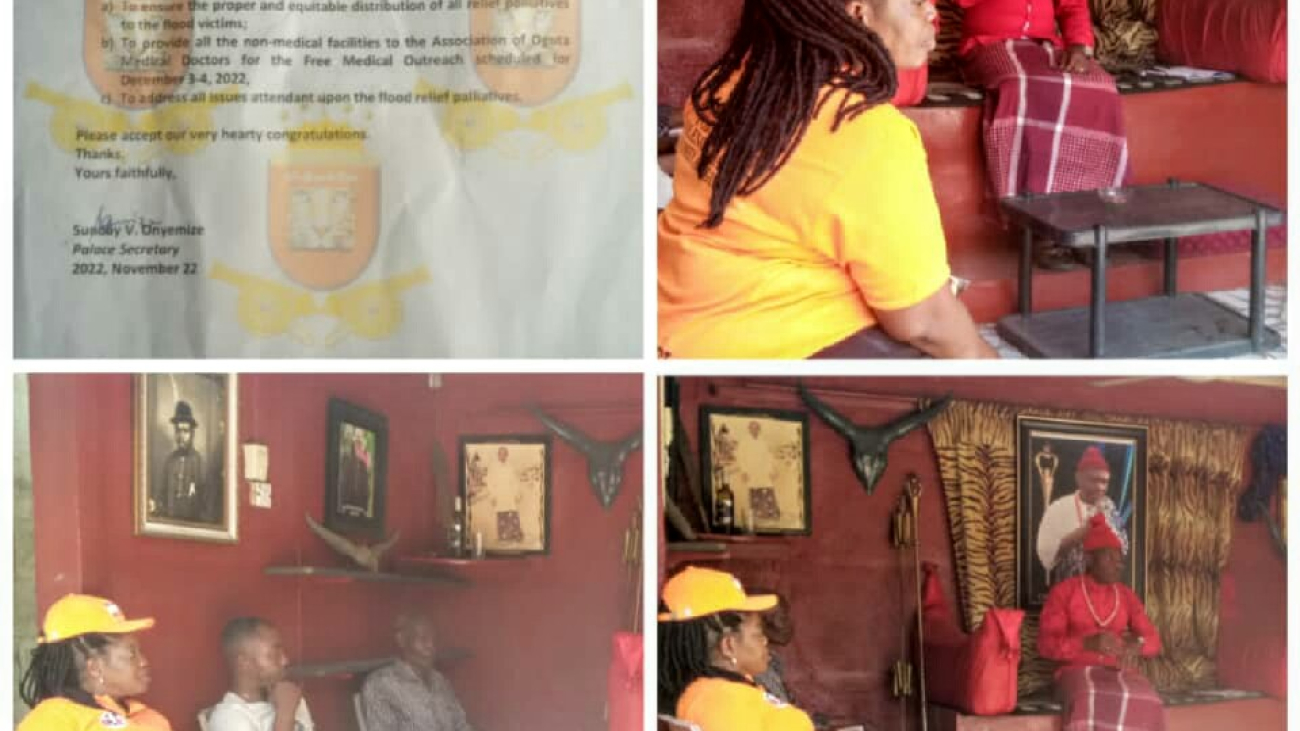 Following the visibility and credibility that ActionAid SLOC-VAWG project has given to Communal Care Centre in our project communities, the executive Director of CCC Mrs. Colette Bennett was appointed member off Oguta flood relief and rehabilitation committee, saddled with the responsibility of ensuring victims of the recent flood disaster are properly supported to return back to their normal lives.

On the 25th November 2022 at the inauguration of the committee, the traditional prime minister (Ogana Oguta) stated that ‘’CCC was brought in to ensure transparency and equitable distribution of the relief materials.’’

Many thanks to ActionAid Nigeria. We are proud to be associated with you. 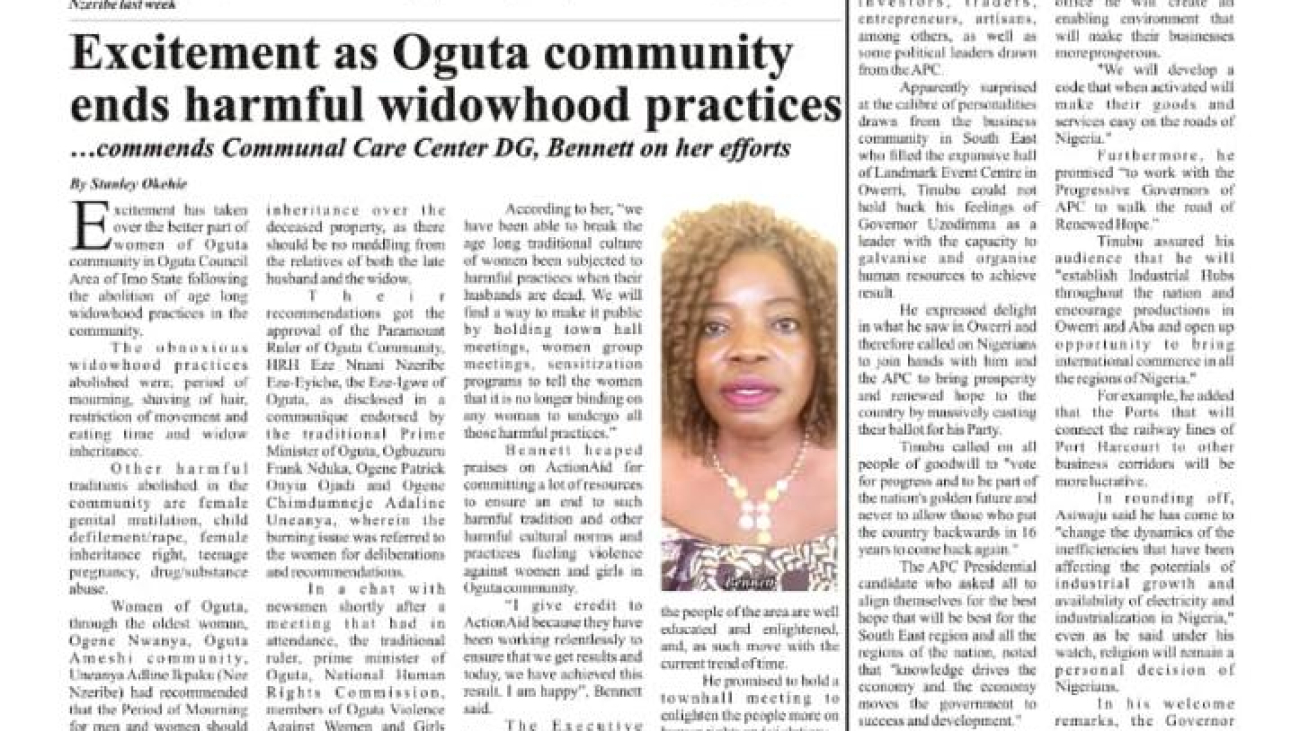 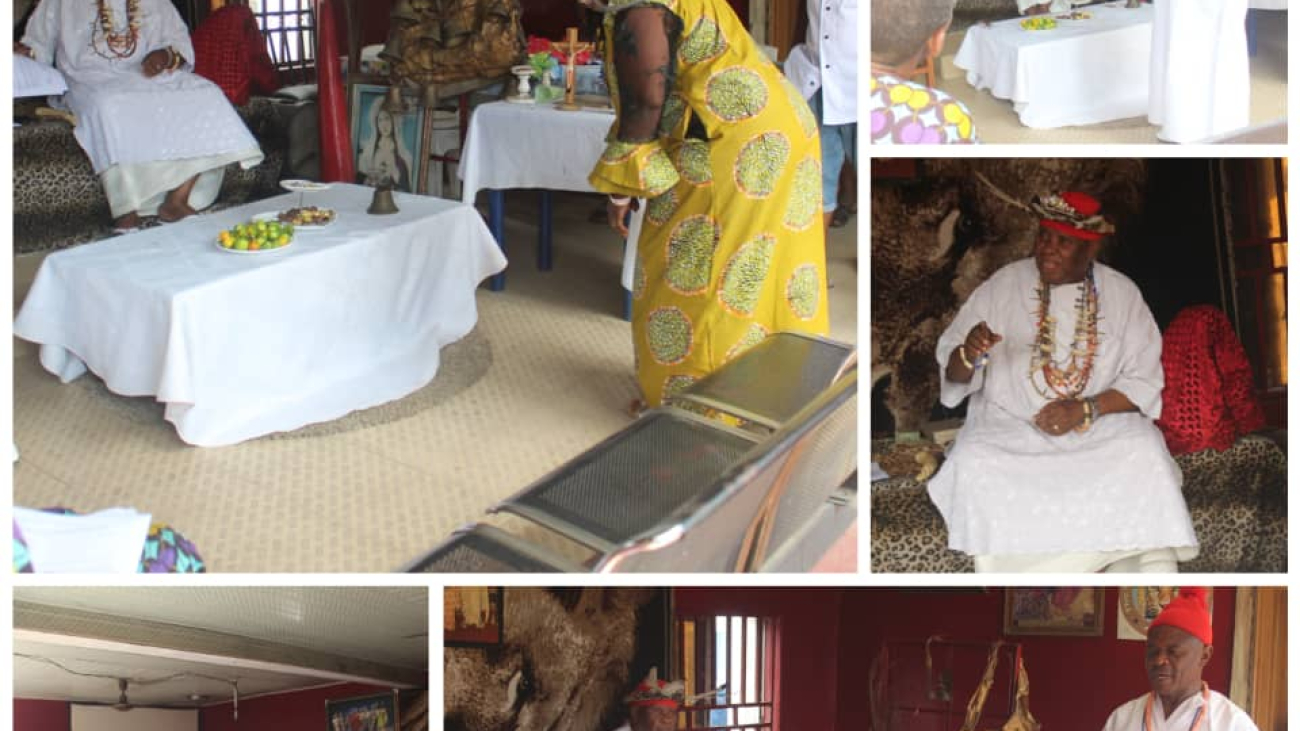 Communal Care Centre recorded yet another feat on ending harmful cultural practices exacerbating violence against women and girls in Oguta community. In a town hall meeting held on Saturday 19th November 2022, the paramount ruler of Oguta, Eze Nnani Nzeribe Eze-Eyiche, the Eze Igwe 1 of Oguta, reacting to the document signed by the oldest woman (Ogene nwanyi) in Oguta, supported by a communique from an interractive meeting with women groups, conceded to making widowhood practice favourable and convenient for women. He practically accepted everything in the document which states that the woman has the prerogative to decide what she wants. He then requested CCC and National Human Rights Commission to support the community in developing a legal document on issues around GBV. He further requested CCC to help arrange a sensitization program for the larger community where the information will be disseminated and copies of the document distributed as a guiding policy document for the community. 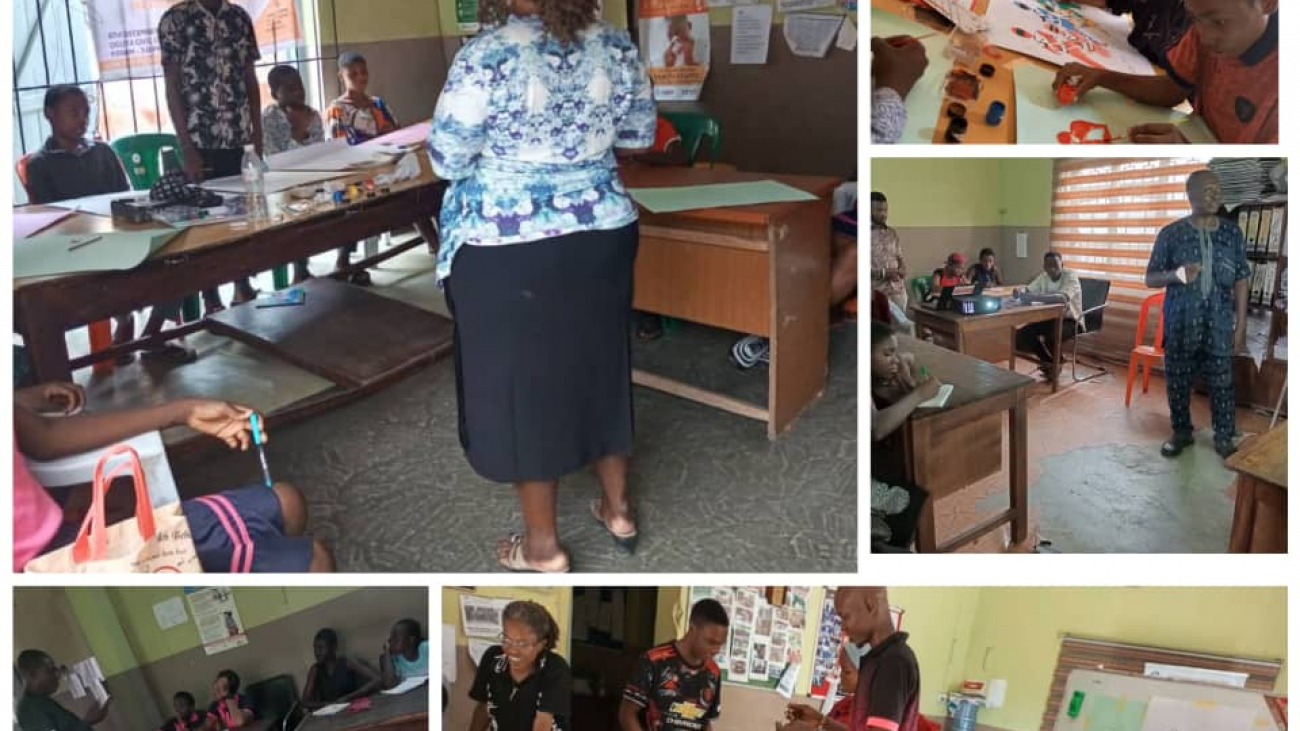 Communal Care Centre on Saturday 29th October 2022 commenced 4 days non-residential Camp Meeting in school adolescent Girls and boys from 4 schools in Oguta and Oru East LGAs. The program which is featuring poems, arts and paintings  is aimed at developing the creative and innovative skills of the children in the preparation for the 16days activism against Gender Based Violence and our forthcoming Annual Whyte Teen Concert. 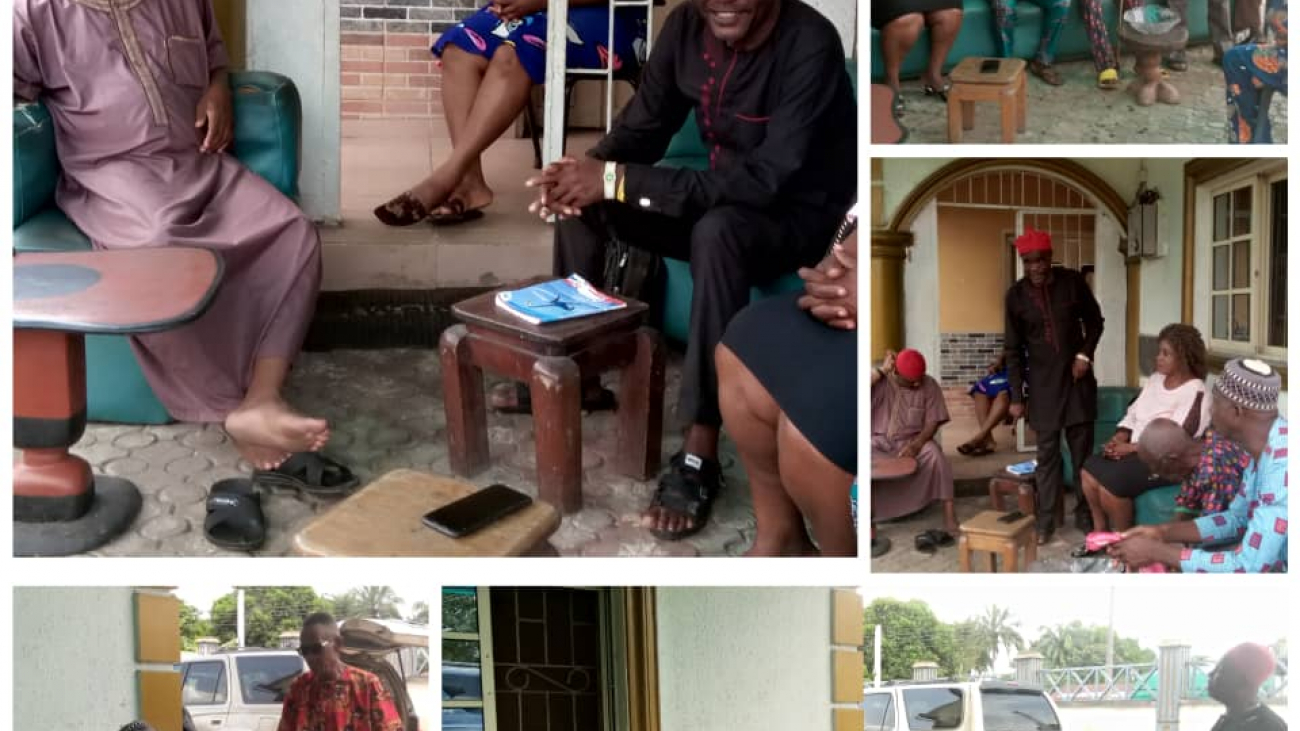 On Friday 28th October 2022, the team of Communal Care Centre and Akabor CRT on Violence against women and girls (VAWG) had an interface with the traditional ruling Council to once again look at the possibility of lifting the age long embargo on melon planting in the community. The elders took turns to narrate the scenario that resulted in the ban, nor was linked to any sacrilege or fetish belief rather they men used it to show control of power over the women (who mostly planted melon then). It was therefore unanimously agreed to abolish that law and December 27th was chosen for the public declaration because it is the unique date sons and daughters of Akabor community, home and abroad gather together to deliberate on issues of concern to the community.  The entire people present expressed their gratitude for the SLOC-VAWG project. 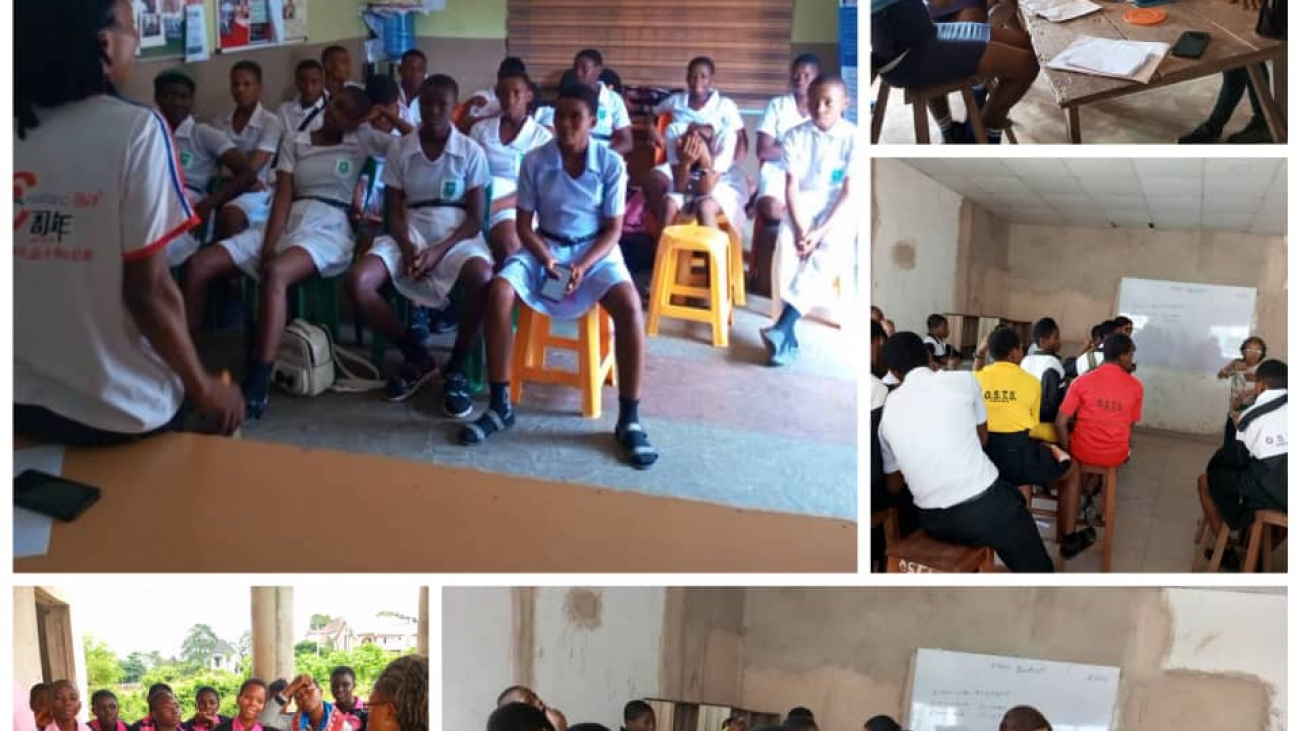 CCC adolescent PE Q1 review meetings held in 4 schools. The meeting was aimed at discussing the camp meeting and Whtye Teen Concert that will be held this quarter. And also discuss activities carried out by club during this reporting period. The peer educators were so excited about the camp meeting and shared experience of the last meeting held at Full Moon Hotel Owerri where they met peer educators from different schools and learnt from the activities carried out by the different clubs. Those that attended the meeting said they were motivated by the presentations shared bs shared by some of the clubs and were challenged. They drew up plans for activities they will carry out this quarter which will include visit to other schools within their environ to educate them on E-VAG. 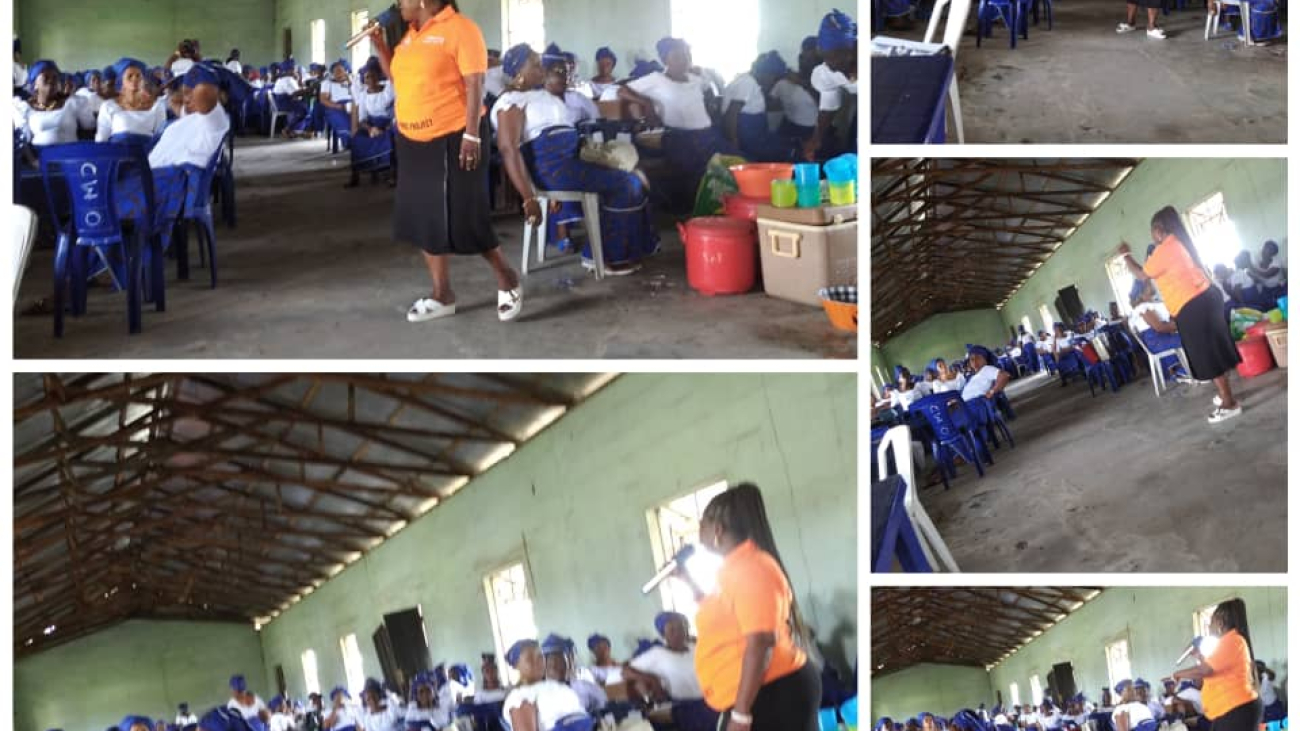 August Meeting is an annual event synonymous with Igbo community, where women from home and abroad gather together to deliberate on issues of concern in the community. CCC bought into this platform on Saturday 20th August 2022 to sensitize the catholic women organization of Sacred Heart Catholic Church Oguta on issues around GBV especially as it affects women and girls. Speaking at the occasion, the Executive Director Mrs. Colette Benette solicited their cooperation and support in ending harmful widowhood practices which is the primary issue being addressed under SLOC-VAWG project in Oguta community. She made it known that the traditional council have given their nod to ending obnoxious culture but requesting a documented consent from the women group. She further advised that women should in unionism have documented evidence of acceptance to be presented to the traditional council. In reaction the women applauded the initiative saying that it’s long overdue and pledged their cooperation. 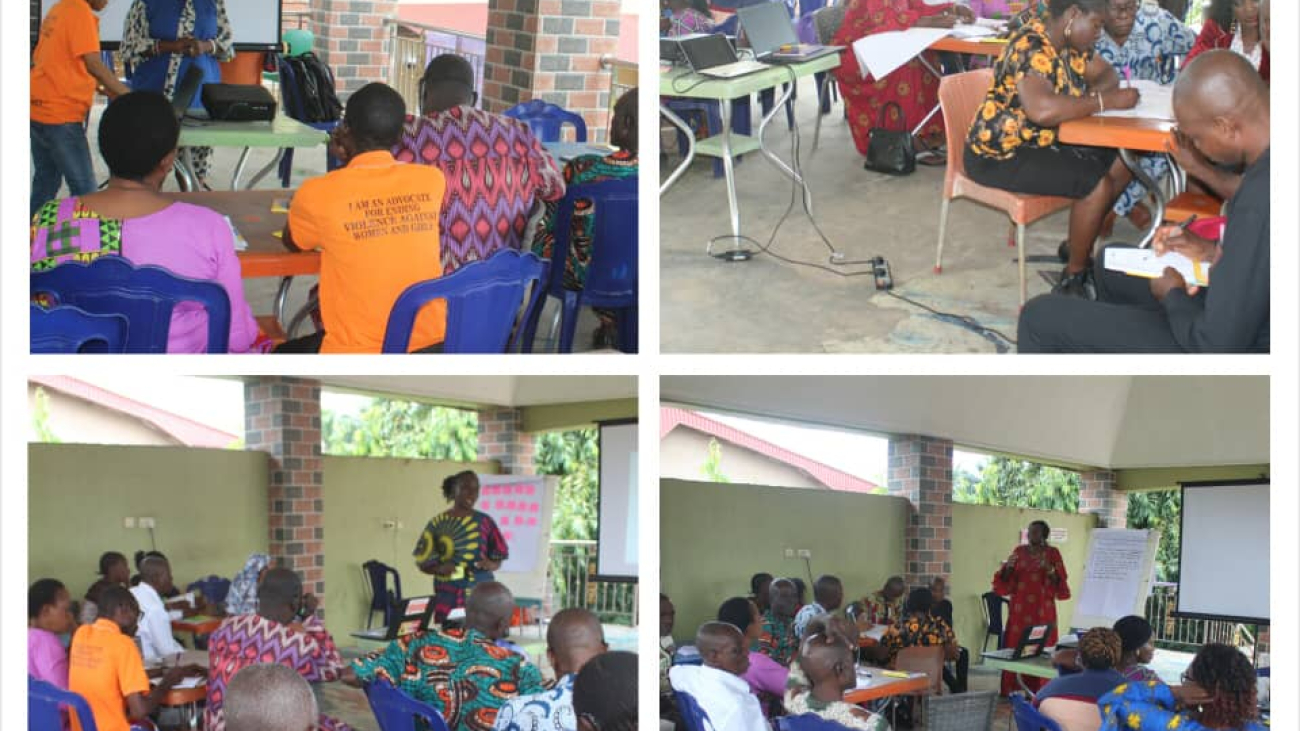 Communal Care Centre commenced 2 days training of the 30- member VAWG Response Committees in the 3 communities of implementation on Community surveillance, Case finding, reporting and documentation. The training is aimed at helping the participants to further understand the concept of GBV and to develop strategies to be used in identifying addressing issues of VAWG in their communities. They were also exposed to new guidelines and law relating to gender-based violence and different strategies to achieve success in case finding and reporting as well as addressing issues around rape/defilement, citing the VAPP as guiding document. Participants were engaged in group work during the sessions for better understanding and participation. Participants from various teams shared experiences and some challenges they have encountered in carrying out their function. Date-10th -11th August 2022. 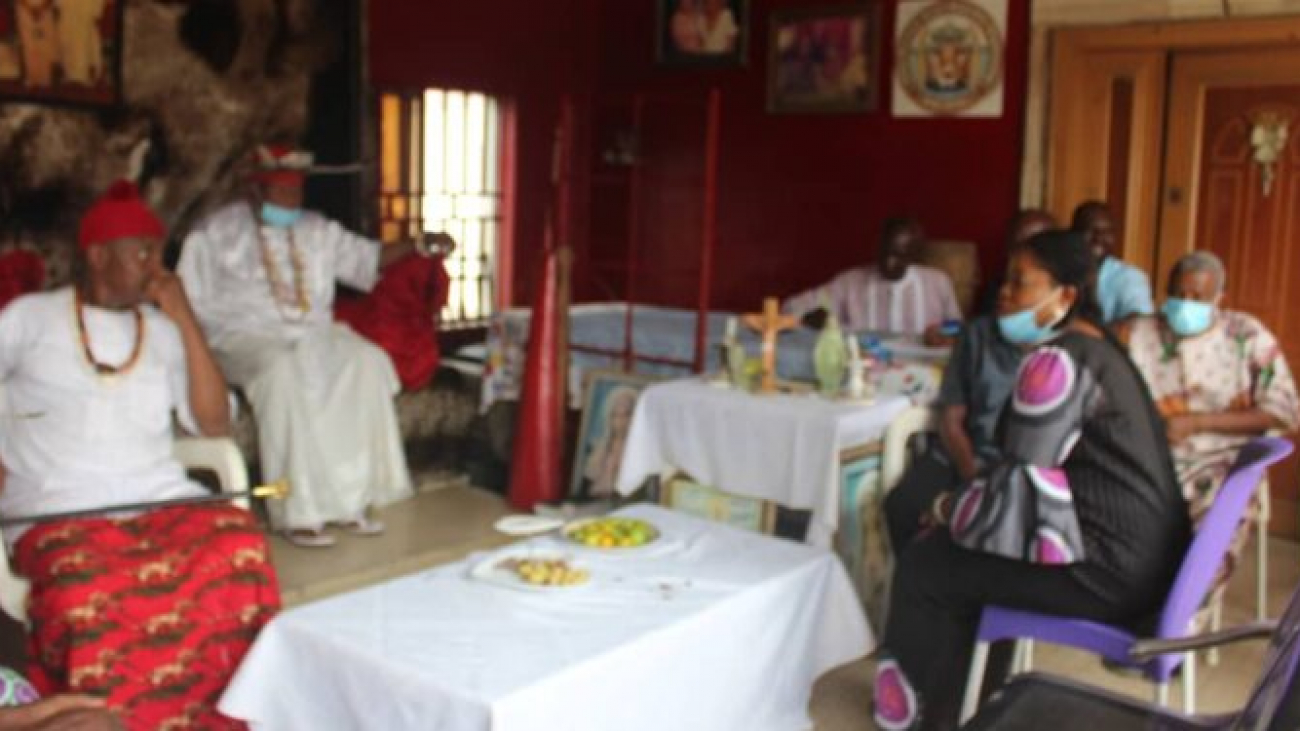 By CHINYERE Nnaemeka
A nongovernmental organization based in Oguta; Communal Care Centre with funding from ActionAid Nigeria has met with the Traditional Ruling Council, and elders in each of the 27 villages in Oguta Local Government Area of Imo State to discuss the need to bring to an end the harmful cultural practices, especially widowhood practices in their communities.
The meeting which took place Wednesday at the traditional ruler’s Palace in Oguta community had the traditional ruler, HRH Eze Nnani Nzeribe Ezeyiche, the elders, the Communal Care Centre team and other stakeholders present.
Addressing the traditional ruler, the Executive Director of CCC, Colette Benette, who appreciated the ruler and the elders for honouring their invitation, pointed out that it is the vision of the organization for there to be a caring society free from all forms of stigmatization, discrimination, and has equal opportunity for vulnerable groups to excel.
She continued that for the aforementioned reason, they with support from ActionAid Nigeria are striving to end harmful cultural practices; Female Genital Mutilation, FGM, widowhood practices, other immoral acts such as raping of a child, youths taking hard drugs, domestic violence, among others.
To ensure that the quest is achieved, Benette disclosed that they have trained some group of stakeholders in the LGA as Violence Response Team, who are to go round the communities to identify those practices and sensitize the people on the need to end them
The response team she said, with the permission of the king are the ones who had organized the meeting with the ruling council.
Speaking earlier, Mr. Ikechukwu Ossai; the convener of the meeting, and Chairman of the Oguta Violence Against Women and Girls Response Team (Onye Egwu Anazo Nwaneya), with his Secretary, Mrs. Ifeoma Oputa dwelt on how children are being raped, and some women beaten to death or subjected to one form of torture or another by their husbands.
They talked about Female Genital Mutilation, FGM which they said have led to the death of many female folk, and left others to face one difficulty or the other, especially in their marriages.
They condemned in its totality the taking of hard drugs; Mkpuru Mmiri, among others by youths, saying that it has led many youths into either unconsciously taking their lives, misbehaving in the street or losing their sanity.
Looking at the issue of widowhood practices, they noted that it is not like they are saying that women should not mourn their husbands, but that they are pleading for them to be allowed to do it in a way they deem fit, and not by forcing them to shave their hair, drink the water washed from the corpse, sleep with the corpse, denied access to his property due to the fact that she did not give birth to a male child, among others.
Such practices they said, have done the society more harm than good, and so it is high time it is stopped, and rules stipulated with penalties for people who fails to abide by it.
They made the council understand that they have met with the oldest men and women in the LGA, who they said have agreed for such practices, especially widowhood practice to be stopped.
The Human Right Commission delegate, Lady Justina Ngozi Okeke who was also present in the meeting, extensively talked about the practices, noting that the VAPP, Violence Against Persons Prohibition Act, which she said has provisions to tackle those practices, have been endorsed by the State Governor.
Advising the council to endeavour to refrain from falling prey to the wrath of the Law, Okeke cited that for FGM, that the Child’s right Law 2004 provides for anyone that engages in such to go to jail for one year or pay a fine of N50,000,
Responding, the traditional ruler, welcomed the team and made them understand that they have already began abolishing some of those practices, citing,”We have nothing like people called Osu in our communities”.
For taking of hard drugs, he pointed out that the youth group in their communities are already looking into it and they will make sure to support them to succeed.
The royal accepted the request of the team, told them to make a communiqué to that effects and avail it to the traditional ruling council for endorsement. 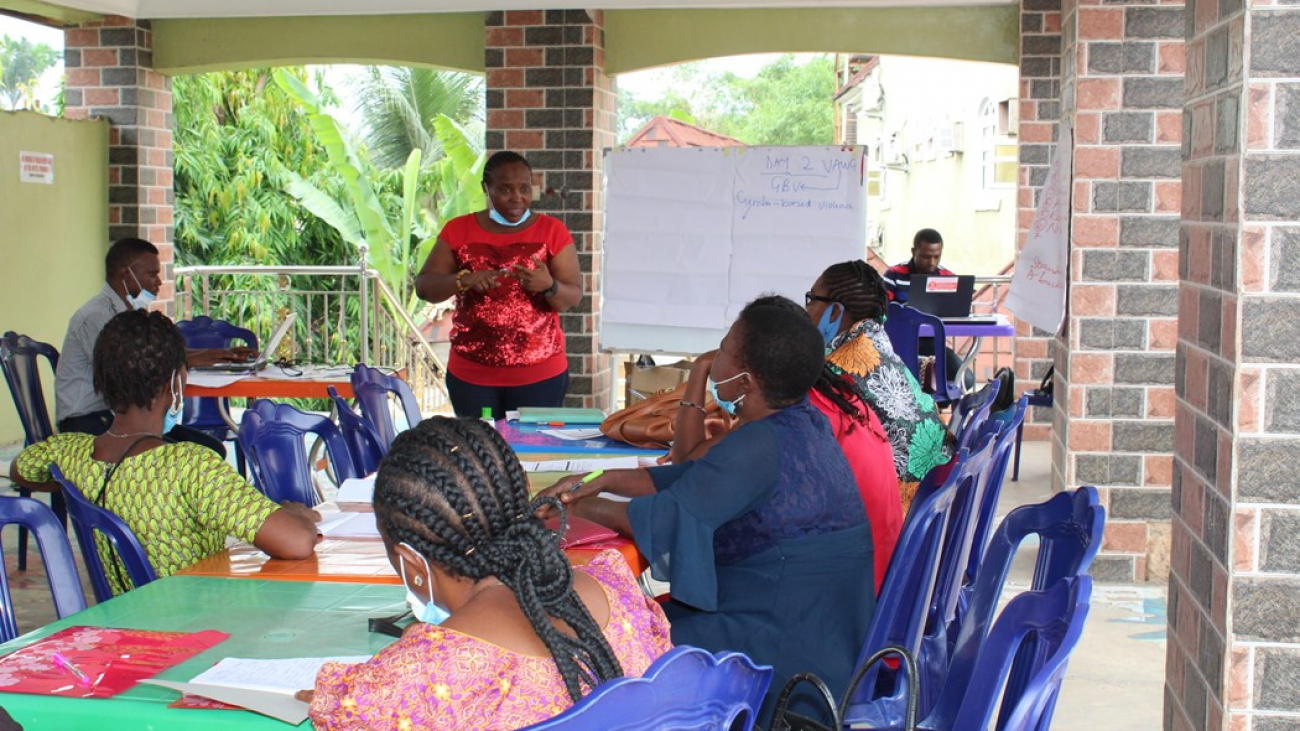 Executive Summary
Day one training of the VAWG response team was held on the 10th 0f August 2022 at 18 ups golden hotel.
The training engaged all the different VAWG response team across Oguta, Akabor and Ozuhu Omuma, the police division of Oru East and Oguta Headquarters and the social welfare representative from Oguta LGA. The training mainstreamed and helped the participants understand more the concept GBV, their participation in ensuring community surveillance, case finding and documentation. Participants from the various team shared experiences and some challenges they have faced. More so, they learnt new guidelines regarding the laws related to gender based violence and the different strategies to achieve success in case finding and reporting as well as addressing issues around rape (Sexual violence).
The topics discussed were based on GBV/community surveillance and case finding/documentation.
They participants were engage in a group work during the sessions of the training to ensure effective participation and also elicit if they understand the process and strategies used in ending violence against women and girls in their various communities especially as stakeholders.
The facilitator Mrs Pearl God’s light provided more insight using their different group presentations on how to end violence against women and girls in the different communities.
Using the training facilitation and different analysis an agreement for a communique to be raised in regards to the agreements was made.

The day one training had 23 participants and 4 coordinators.